Jason James, AKA sparky! OK so a few years back when i was living in Escondido building cars my boss calls me into his office.... Randy says hey Andy we have this dude here from south Dakota for an interview, can you tell him about some areas around town that he might look at for a place to live.. he is thinking about moving here to come work for us. Here sat this really quiet, baby faced dude with a Chevy racing hat, tight blue jeans, and some shit kicker boots. I explained to him kinda where i lived and how much my rent was etc, but was kinda short and was trying to get back to my project.
a week later the dude rolls up with a tool box and a cut up sportster in a 90's Chevy pick up. he started work the next day. We had this little roadster pickup in the shop that sat around forever and never moved. Randy had Jason start working on the pickup. He was supposed to channel it over the frame like 4in. Jason got to work and i don't think anyone said a word to him for like a week he was really quiet and you could tell he wanted to stay out of everyones way. he was cutting the floor out so that he could drop the body super low over the frame. That first week all anyone saw of Jason was a little pick up truck with a steady shower of sparks spraying out as he cut the floor out. Randy walked past a bunch of times and noticed the fact that no one could be seen but there was a massive spray of sparks at all times. This is where his nick name sparky came from! The day he started had you told me that Jason would soon become one of my very best friends i probably would have laughed! Turns out that Jason James is one of the coolest, most down to earth guys i have ever met. Jason and I both lived in apartments and had virtualy no space to work on our bikes. He and i ended up renting a one car garage and building both of our bikes (his sporty and my rd350) in this one car garage. Through that we ended up hanging out everyday and becoming best friends. Even though i moved away i still talk to Jason a few times a week and we still laugh about the crazy stuff we got into out there in Escondido.
Well 3 years has past and that little truck that Sparky did all the metal work on is in Car Kulture Delux this month, check it out! Thanks for being awesome Sparks wish we got to hang out in person more. 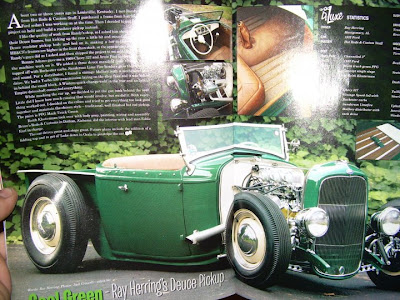 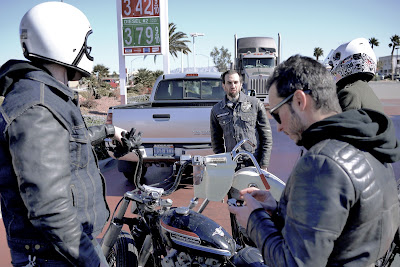